The Psychodiagnostic Process November 10, 2010 By Dr. David B. Adams 0 Comments

Where do you draw the line between psychological problems that arise from injury and those that either pre-existed or are coming from other sources unrelated to injury?

Psychological problems arising from injury are almost the norm. The patient is in pain, become anxious, depressed and confused.

However, in an equal number of cases, the psychological problems take on a life of their own and suddenly the doctor is presented with a barrage of personal, social, family, and interpersonal problems which the patient would like to address_and which may have nothing whatsoever to do with injury.

It is important, therefore, to tell the patient from the onset that _you will be seen for 8 return appointments_during that time, other problems may arise that are not related to your injury. For those unrelated problems, I shall refer you to someone in your community that can address those issues since they are not our domain in this setting._

It is important that the patient be reassured that his/her problems are recognized and of concern but that he/she must differentiate them from the problems that have arisen solely because of injury.

If one allows those boundaries to become blurred, the patient will form a dependent attachment and begin to believe that all problems are the domain of treatment.

Let me give you an example: A patient was referred after she injured her neck. She had the option of dealing with the pain or considering a cervical surgery which her condition did not mandate but which was an option. After she had dealt with that decision, she wanted to discuss the critical health problems of her diabetic son_the recent shooting of her son in a carjacking situation_the unhealthy alliance between her sister and mother_the drug seeking behavior of her daughter-in-law_ All are valid concerns, none were related to her injury. 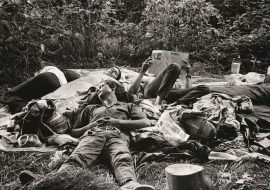 On Thursday, April 30, 1970, President Richard Nixon announced the movement of our troops into Cambodia (the Cambodian Incursion). …
Read Blog Post