Anorexia Nervosa – can be separated into two types: the restricting type in which the individual dangerously limits food intake but does not binge eat or purge (self-induced vomiting or use of laxatives, diuretics, enemas, etc), and the binge-eating/purging type. In both cases there is a refusal to maintain a minimally normal body weight, and the individual weighs less than 85% of ideal body weight. The individual has an intense fear of weight gain or obesity even though they present to others as markedly underweight. Such individuals deny the severity of their condition, and they have a disturbance in perception as to the appearance of their body. In females this is often accompanied by the absence of menstrual cycle. The dangers are apparent since the body is deprived of needed nutrients and the use of purging procedures can increase the health hazards.

Bulimia Nervosa – involves recurrent episodes of binge eating in which the quantity of food consumed is definitely larger than most would eat during a similar period and under similar circumstances and there is an apparent lack of control over the eating (the person cannot stop). To prevent weight gain, the person will engage in self-induced vomiting, use of laxatives and/or diuretics, enemas, fasting, excessive exercise, etc. Bulimia is characterized not by a distortion in body image as much as this binge eating and compensatory attempts to avoid weight gain from the binging. For the formal diagnosis, this must occur twice a week for three months, and the individual’s assessment of their body shape and weight influences the cycle of eating and then compensating. The are the purging type bulimic individuals in which the person uses the laxatives, diuretics, etc. and the nonpurging type in which the individual fasts or excessively exercises to compensate.

Eating Disorder Not Otherwise Specified is reference to a combination of unhealthy behaviors which in combination do not fit specific criteria for a disorder but which obviously limit the social and/or occupational functioning of the individual. For example, in the case of eating disorders, there are individuals who meet the criteria for Anorexia Nervosa but have regular menses, who have lost appreciable weight but are still within average weight limits for their height, who engage in purging activities but do so with less frequency than necessary to meet diagnostic criteria, who engage in purging activities after small amounts of food and/or who chew and spit out small amounts of food. Human behavior and psychological problems are a continuum and even when all criteria are not met, the behaviors can still be maladaptive. 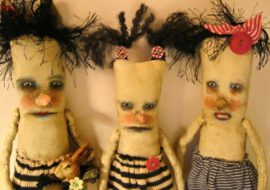 The differences between BiPolar Disorder and Major Depressive Disorder (MDD) can be substantial. First be aware that: a. …
Read Blog Post

Clearly, this would seem not to be a clinical matter, merely a financial one. But I suspect that early settlements occur …
Read Blog Post