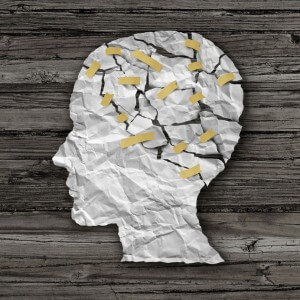 Anxiety Disorders – Although anxiety symptoms can present in a wide variety of forms, all are organized around the central components of “nervousness” and/or reactions to being so agitated. The person, when anxious, has begun to substitute maladaptive approaches for more reality-based responses to problems. The anxiety may be be based on present, past, or future (even imagined) events. That is why we are able to be anxious over things that have never and may not even be likely to happen. We create these events in our fantasy and then become frightened over their “potential” for occurrence.

Depressive and Bipolar Disorders – are still sometimes referred to as affective disorders or disorders in the appropriate experience and expression of emotion. The mood episodes are components of the mood disorders, more or less their building blocks, and the episodes include: Major Depressive Episode, Manic Episode, Hypomanic Episode and Mixed Episode.

Schizophrenia & Other Psychotic Disorders – are still quite often misunderstood by individuals not involved in the care of such patients or not personally exposed to patients with the disorders. Psychotic disorders are characterized by a difficulty with reality testing – differentiating what is real from what is imagined, and the disorders may be characterized by false belief systems referred to as delusions and often by auditory and/or visual hallucinations. The individuals capacity to deal with their work is severely impaired during the occurrence of their disorders. While extreme environmental situations may produce psychotic symptoms, it is generally accepted that many of the psychotic disorders are attributable to a defect in brain chemistry and the way in which the brain processes its electrochemical impulses.

Sexual & Gender Identity Disorders – Sexual Dysfunctions are characterized by disturbance in sexual desire and the physical changes that characterize the response cycle of sexual excitation and sexual activity. They are dysfunctions when they case personal distress and/or interpersonal (social) difficulties. They can arise in the area of desire, excitement, orgasm, and/or resolution. They can be of lifelong or acquired duration and can be generalized to many situations or situational and occur only in specific situations. They can be due to psychological factors or due to a combined physical and psychological problem.

Somatic Symptom Disorders – the physical symptoms suggest a medical condition, but in the absence of, or excess of, objective clinical findings, the disorder is judged to be not physical but Somatoform. The disorder resembles a physical problem. The patient, however, either does not have the disorder or his/her symptoms are markedly more extreme than would be indicated by the physical findings.

Factitious Disorders – are not synonymous with fictitious. Factitious is not the same as the act of malingering. Malingering does not constitute a mental disorder; factitious disorder does constitute impaired psychological functioning. Factitious Disorder involves voluntary amplification or production of physical and psychological symptoms due to internal motivation, an unconscious need to maintain oneself in the role of patient.

Sleep Disorders – Sleep disorders can be primary in which there is a defect in the sleep timing mechanism (sometimes called sleep architecture) called dyssomnias and by parasomnias which includes nightmare disorder. Sleep disorders may also arise from medical conditions, another psychological problem such as anxiety and/or depression or even induced by substance (Eg. alcohol).

Eating Disorders – severe disturbances in eating behavior. Obesity, while a health hazard, has not itself been shown to be associated with a psychological disorder. Eating disorders include anorexia nervosa and bulimia nervosa. In both disorders there is a disturbance in the perception of body shape and weight.

Adjustment Disorders – arise in response to one or more stressors that occur within three months of the onset of the patient’s symptoms. The symptoms can be emotional and/or behavioral. It is characterized a significant impairment in social and/or occupational functioning.

Impulse Control Disorders – the failure to resist an impulse, drive or temptation to perform an act that may be harmful to self or others and is followed by pleasure and relief and then often followed by guilt and remorse.

Malingering – Although not a psychological disorder, malingering is a pattern of behavior that is particularly distressing. The deliberate exaggeration of psychological and/or physical complaints for purposes of tangible gain (Eg. monetary rewards, etc) is referred to as malingering. The use of the health care system and its resources are severely impacted by patients who malinger. Access to clinicians by patients with valid concerns can be obstructed as well as costs escalated by needless tests for falsified symptoms.

Catastrophic status is a legal term, not a medical one. All any clinician can provide in such cases is an assessment of permanent …
Read Blog Post

Cases deteriorate for 5 simple reasons:1. The patient is not providing all, or even accurate, information.2. The employer …
Read Blog Post

In an ideal world, patients would tell us the truth and be motivated by nothing more than recovery and return to productivity. …
Read Blog Post