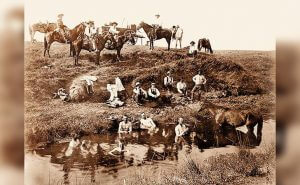 Development:  Private patients come to me with truly remarkable past histories.   If you accept that those histories were the development and foundation for adult problems, these problematic childhoods seem obvious.

But injured workers are rarely those who would seek psychological care had it not been for their injuries, yet the history of life events among injured workers are often impressively traumatic. They often come from broken families and are alienated from parents and sibs; abuse, neglect and rejection are not uncommon. Early adulthood is marked by intense discord, frequent relocations, very young but dysfunctional marriages and a sense of being burdened early in life. Such an unstable background results in early termination of school, not only because of lacking role models but by the imperative of having to create income.

Arrests and convictions are passively accepted. The patient may actually fail to recall an arrest for possession, nonpayment of support, disorderly conduct or simple assault. And quite often the arrests were created by someone falsely accusing them; the arrest used as a weapon by family or former friend.

The patient with such a history has likely moved through a series of McJobs and temporary agencies, learning skills along the way. They often work for employers who, themselves, are transient, go out of business, become financially insolvent, and offer inconsistent work. The injured worker may have learned to treasure those jobs which do not involve four walls, certainly involve no desk, and are sought for their comparatively higher per hour wage. And they are financially leveraged to the hilt with past bankruptcy, child support, family illness, and non-repayment of debt from friends.

In order to return the employee to productivity, the injury needs to be understood in its context, not only at work, but in the course of development.

In the ideal world, the primary treating physician is a member of the employer_s panel. That ideal panel would consist solely …
Read Blog Post

Psychopaths:   Going to your pain doctor for narcotics which you then sell on the street or working while receiving disability …
Read Blog Post