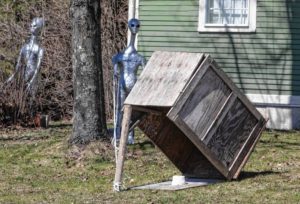 Between 50% and 70% of those who have experienced one episode of major depression will experience another at some later point, which represents a 5- to 10-fold elevation of risk when compared with the general population. Chronic minor depressive disorders (ie, Dysthymic Disorder) are similarly associated with a marked increase in the risk of subsequent major depressive episodes.

Episodes of recurrent depression may lead to adverse economic, interpersonal, and medical consequences. Complications such as alcoholism or substance abuse also may develop during an untreated and relentless depressive episode. In addition, depression complicates the course of chronic general medical illnesses such as diabetes and atherosclerotic heart disease.

Most initial depressive episodes are temporarily related to stress, which highlights the role of stress-diathesis vulnerability interactions, suggesting that certain critical factors impinge on a person’s life, which may in turn become a catalyst for the development of an illness in those who are genetically predisposed. Women have about 1.7 times the lifetime risk of developing a major depressive episode. Other relevant risk factors include a family history of affective disorder or alcoholism, a pattern of cognitive distortions, personality disorders, chronic medical problems, and a history of early trauma or abuse.

Depressive disorders themselves have an impact on sleep. Major depressive disorders can disrupt sleep continuity, resulting in increased sleep latency (i.e., trouble falling asleep), waking after sleep onset, early morning awakenings, decreased slow-wave or “deep” sleep, a shift of the rapid eye movement or REM phase of sleep to earlier in the night, and an increase in the length of REM sleep.

Generally, antidepressants suppress REM-stage sleep, and that appears in a prolonged latency to REM sleep and a reduced percentage of REM sleep. There actually is a theory that it is the REM-deprivation that is the antidepressant effect of the drugs.

But nefazodone (Serzone), an atypical antidepressant that was once marketed in part for its sleep-aiding properties, is a notable exception because it helps users sleep better, even though it actually increases the percentage of REM sleep and decreases the time to onset of REM. Bupropion (Wellbutrin) and mirtazapine (Remeron) also appear to produce clinical improvement in sleep without favorably altering REM.

Some antidepressants, such as certain tricyclic agents (amitriptyline, doxepin, desipramine), appear to have a beneficial effect on sleep in relentlessly depressed patients by reducing the overall percentage of REM sleep and by increasing the number of minutes until the first REM period or REM latency.

Other agents, such as venlaxafine (Effexor) and selective serotonin reuptake inhibitors (fluoxetine, paroxetine, et al.), also can shorten REM sleep and REM latency, but the stimulatory effects of these drugs actually may result in sleep fragmentation, worsening the efficiency of sleep and thereby canceling out the possible benefits.

The SSRI’s are currently the most commonly prescribed antidepressants. They are typically the first-line treatment for depression and anxiety disorders because of their ‘benign’ side-effect profile. Unfortunately, many patients taking these agents experience a worsening of their insomnia.

Some patients on SSRIs who are plagued with drug-related sleep problems may benefit from an added bedtime dose of the atypical antidepressant trazodone (Desyrel), although the combination does not appear to speed remission of depression. Overall, trazodone in doses as low as 25-50 mg at bedtime significantly improves sleep initiation and efficiency, with a shift of sleep to deeper stages. They also note that the hypnotic effect of the drug appears to be durable with continued use, but with no potential for fostering dependence or tolerance.

Within the first twelve months of injury: 1. The patient has become increasingly alienated from coworkers and the employer …
Read Blog Post

Clinical Decisions: There are injured workers who appear to languish in care moving from orthopedic care to pain management …
Read Blog Post

The injured worker can be expected to have the full range of personality disorders seen among all people, although there …
Read Blog Post